Released on their own brand new label called HLR, GRASS WIDOW serve up their fifth official release and the first of what is going to be a string of 7″ singles based on the theme of collaboration, called the Common Chord series. END_OF_DOCUMENT_TOKEN_TO_BE_REPLACED

Released by the Sweet Rot label in Vancouver, BC comes an interesting 7″ consisting of revered Australian post-punk band PRIMITIVE CALCULATORS, backed with a cover of the same song from Sacred Bones’ SLUG GUTS. END_OF_DOCUMENT_TOKEN_TO_BE_REPLACED 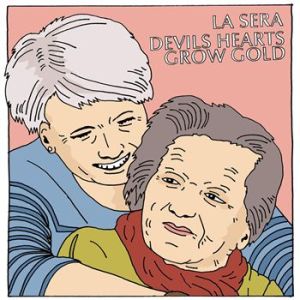 This 7″ single is the first release from LA SERA since this years self-titled full length. Both come from the Hardly Art label, while this 7″ holds the previously unreleased B-side cover track “Dedicated to the One I Love”. END_OF_DOCUMENT_TOKEN_TO_BE_REPLACED

Coming from the Kill Rock Stars imprint we have a delightfully new 7″ from Portland’s own HORSE FEATHERS today. This 7″ was just put out at the beginning of the month, and it’s significance comes along with an interesting story, told best by the people at Kill Rock Stars. END_OF_DOCUMENT_TOKEN_TO_BE_REPLACED

Yo! So I saw Titus Andronicus and Free Energy last night in Philadelphia. I hope y’all don’t mind that I left behind the cameras and stuff, because there was WAYYY too many people there to be whipping out a camcorder in the middle of the (much) heated madness. It was extremely hot, and extremely packed.

If you’re from Philadelphia and also familiar with R5Productions, then you know what it’s like to be at a sold out show at the Church. It tends to be very unpleasant, that is until the bands you’ve been waiting for take the stage. Then suddenly everything is okay again. Like that weight is lifted off your shoulders. That weight being the hundreds of people behind you pushing and going ape-shit and just trying to scramble to the front. Except that never really stops – the people just keep pushing the whole time, like a never ending storm out at sea. You’ve only got three ways to escape the madness – 1.) stay up front until the show ends, 2.) crowd-surf the FUCK outta there and get to the back, and 3.) just turn around and try clawing your way out. The third is probably the most difficult way too.

So as some of you may already know, Titus Andronicus and Free Energy put together quite a treat for us before they set foot on this current tour (which actually ends this weekend in New York). It’s a split 7″ with one song from each band on either side. Titus Andronicus covers the Television Personalities “Anxiety Block”, while Free Energy take on Bruce Springsteen’s “I’m Going Down”. Both songs are excellently executed, and I’m having an exceptionally hard time trying to figure out which of these two covers I like better. Free Energy does a fantastic job of capturing some of that authentic Bruce Springsteen & the E-Street Band magic, while Titus does an equally awesome job of destroying faces and tearing shit up with their cover.

“Anxiety Block” is a fitting song for the way Titus usually does things – loud, excessive, relentless, and triumphant. And Paul Sprangers (of Free Energy) voice is surprisingly soothing and comforting in their Bruce cover, complemented by some flawless guitar playing that even the Boss himself might be a bit jealous of. Not that he has anything to worry about. I’m sure he’d approve of this cover. And I’m sure you guys will, too. It’s a magical track indeed – kind of like love at first listen. Check out both sides of this 7″ below, and if you live in either Washington D.C. or New York, it’s still not too late to catch both of these bands live in action. Because let’s be serious people – that’s how Titus Andronicus and Free Energy were meant to be experienced.