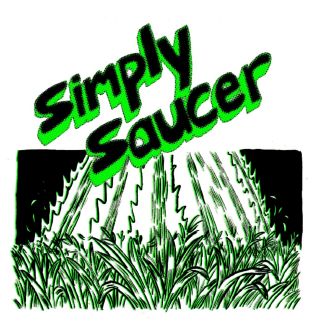 It’s been a long strange trip for metalloid cult Canadian band Simply Saucer who after forty years of cryogenic sleep, have emerged with some fresh music courtesy of a new released 7” via Label Obscura. Hot off the heels of In The Red’s recently released definitive reissue of the band’s 1970’s recordings, Cyborgs Revisited; group leader, Edgar Breau leads a newly reformed incarnation of the band featuring original Saucer bassist Kevin Christoff alongside a crack team of new recruits through two new tunes.

While these new songs may lack a bit of that lighting in a bottle proto-punk urgency that propelled Simply Saucer’s vintage material into the upper echelon of the great lost garage/psych discoveries, there’s a still plenty to dig into on these two sides. “Lo-Fi Garage Symphonette” trades in a bit of the synth freak-outs of days gone by for a more cowbell please strain of garage rock swagger.  It’s a tribute to the band’s Nuggets era heroes who corrupted the young Breau’s mind with rock ‘n’ roll dreams. Brimming with references to some of the group’s most loved 45’s; it’s full of sly nods to influences such as The Seeds, Question Mark and The Mysterians, and Wally Tax & The Outsiders.  While the flip side, “Alien Cornfield,” is the kind of song Fox Mulder would definitely include on a mix tape for Agent Scully.  It tells the tale of two kids who have their own close encounter of the fourth kind, who by the songs’ end are taking a cosmic trip; while featuring plenty of trippy flourishes along the way that recall the Saucer’s earlier days.

Will new fans that just caught an electrical contact buzz off of Cyborgs Revisted get the same kind of raw thrill from these two sides?  The short answer is, probably not, and why should they?  It’s literally been a lifetime since Simply Saucer first plugged in, and created a special type of noise that took a very long time to find its place in the world.  So allow yourself a little bit of time for these new tracks to sink in to that ol’ gray matter before passing any final judgments.  At any rate, it’s great to have them back.

BUY the 7″ on Bandcamp