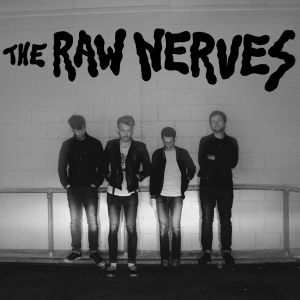 You can stop waiting, for THE RAW NERVES have returned with their long-awaited sophomore record. More Nerves is their second LP on 1:12 Records in New Zealand, coming with 15 more tracks about love, depression, straight-up hooliganism, and then some.

It has been a good chunk of time since we’ve heard from this 4-piece, Auckland City-based crew. For a moment, you might not have even thought this record was going to happen – they dropped their debut in the summer of 2012, then they followed it with an EP three-quarters of a year later. A few months went by and guitar player Rory began playing in another band called Cool Runnings that released their first EP in October 2013 and the Raw Nerves went silent for awhile. Now they’re back in full force with the release of their LP and a slew of supporting shows planned for August.

For the most part, the band is picking up right where they dropped us – on the flip side, they take the touchy side of the love fence, offering a longing, down-on-yourself type of vibe (if you ask them, it’s “emotional toughguy music”) in a few spots on the LP (“Oh Girl,” “Don’t Break My Heart on Valentine’s Day,” “Talk Me Down”). Aside from these, the gang executes the rest of the LP with their own fun-loving charge, providing the same riotous, high-energy and spirited approach that we heard on their debut. Of these 15 tracks, there’s not a dull one in the bunch. If it’s not a sub-minute blitzing (“I’m Uptight,” “I’m Disgusting,” “I’m Dead Inside”) it’s a three minute anthem that’s out for flesh and blood. “In Retreat” fits the mold, unfolding boldly and angrily with a stampeding rhythm that tramples you as if you were a doormat. Frontman Rory scowls away about living in a cave in the hills and pretending that everyone else is dead, all while guitars shred and bass throbs into a dense and pummeling concoction. There’s a thin layer of keyboard used in there too, adding a touch of melodic effect to each crusty chord.

The record takes flight with “Nobody Gives a Shit About You,” showing off their infectious blend of soul and humor, not to mention the bluesy garage crunch in their sound. Tight and wiry guitars press onward as the band chants “It’s about me!,” sending us straight toward a moody guitar solo that threatens to light the fuse with a sparkling flame. “Let Me Listen to Your Problems” comes with witty and heart-felt vocal hooks, supported by a bruising, tom-heavy rhythm and low-end bass rumbling. The chorus involves some doo wop-flavored backing vocals, lightening the mood and providing a breezy, swaying motion. It’s hard not to love little bangers including “I’m Uptight” and “I’m Disgusting,” wherein the band is channeling a bit of Rory’s “higher learning” from Cool Runnings. “Evil Spirits” is a homage to bluesy punk rock from the California gold rush, driven by a sweeping tambourine rhythm and gritty guitar hooks that chug along without a second thought. “I Dream of Wizards” comes with a punching rhythm, complemented by an electrified stream of warbled and wigged-out guitars that reach for the sky. They slow it down in the final minute, creating a breezy, surfy and beach-ready tone to wrap up the track. Album closer “I Love This Town” is an anthem of sorts, complete with backup vocals and cheering fanfares, but the best part is that you can truly feel the love pouring from within – these guys are happy to call their home home.

Listen to the tracks below, then sit tight until August when 1:12 Records in New Zealand drops the LP. Keep an eye out right here for when it is available to purchase – it is certainly worth noting that their debut album is also still available.