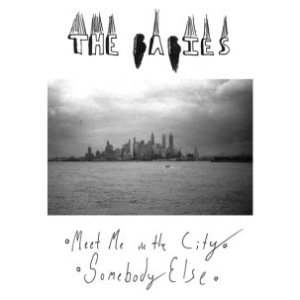 The Babies are a band from Brooklyn, New York. It’s probably not a surprise that their from Brooklyn either, because what band isn’t these days? The Babies formed somewhat recently, and thus far into their short existence they have released two equally awesome 7″ singles. The first one, “All Things Come to Pass”, was put out on Wild World Records, but it is currently sold out at Wild World. If you’re looking to buy that 7″, you can still get it at Midheaven Mailorder, just follow that link. Probably better to do that sooner than later. Their second 7″, “Meet Me in the City”, came out not long after the first, and you can still grab it for a very fair price from Make a Mess Records. Kevin Morby takes care of the singing on “Meet Me in the City” while Cassie Ramone adopts the backup vocals. For the earlier single they switched positions and Ramone dominated the singing on “All Things Come to Pass”. With that being said, it’s almost like two entirely different bands when switching from one single to the other.

If you’ve read about the Babies elsewhere on the web, then you probably already know the story. Kevin Morby, bassist of the band Woods, plays guitar in the Babies. Cassie Ramone of the Vivian Girls also plays guitar in the band, along with drummer Justin Sullivan who once played in the NYC band Bossy. Last but not least is bassist Nate Stark, who also plays in the band Stupid Party. In other words, you could say these guys are a bunch of hometown hero’s coming together and breeding the latest Brooklyn pop sensation. Hear for yourself and check out the mp3 below. This post is also a great excuse to re-post videos from the Babies/ Titus Andronicus show that recently went down in Philly. Enjoy.

PS – Oh yeah, and Happy Cinqo de Mayo to all! Except that Mike Hunt asshole guy…

All Things Come to Pass