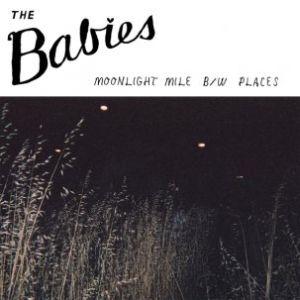 Somewhere in the process THE BABIES had to stress the fact that they were not “just a side project.” With the kind of stuff they’re churning out right now, that doesn’t really come as a surprise.

This new single makes it easy to say that by now the Babies have hit full stride. This 7″ features two of their latest tracks – “Moonlight Mile” which will appear on their upcoming LP Our House on the Hill, backed with a previously unreleased track called “Places.”

“Moonlight Mile” is a healthy one, filled out with floating melodies and a few scattered guitar licks, reinforcing the idea that the Babies are at the height of their powers. Kevin Morby sings in his bold and wailing tone, only adding to the track’s propulsive pop spirit. Underneath it’s driven by punchy bass lines and an invigorating guitar jangle, resulting in a heavily noisy finale as the track wraps up. It’s easy enough to say right now, but if the upcoming LP is anything like this, we’ve all got something to look forward to. Flipping to the B-side, “Places” is a warming and folksy jammer, featuring that innocent Babies twang that consistently makes their music easy to love. Rugged guitar soloing and a marching snare drum help lead the way, eventually wrapping this single up with high hopes for the future.

It all lasts for under five minutes, but this is definitely another solid 7″ from the Babies. Perhaps it’s their best one yet, but maybe we should let you decide that. Below you can hear both sides of the 7″ (ripped from the vinyl itself). After checking there doesn’t seem to be another spot to listen to “Places,” so please take advantage.

BUY the 7″ directly from Insound – limited to 1000 copies !
The Babies on Tumblr