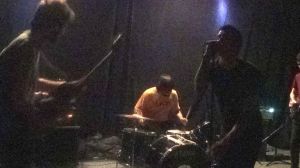 EX-CULT made a stop in Philadelphia last night to play at Underground Arts. It was their first ever visit to the city, who were joined on stage by local punk freaks The Abandos (who will be playing at the 2nd SD Showcase on June 11th). Ex-Cult are currently touring for their sophomore LP Midnight Passenger, which was just released by Goner Records on April 29th. They played a large handful of songs from the LP, including these few that we caught live for you below. In other news, The Abandos just released a new 7″, which includes the sludgy tantrum below called “Missing Chromosome.”