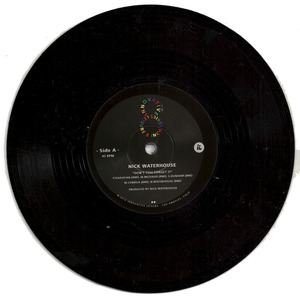 NICK WATERHOUSE came back with a brand new single for Record Store Day last month. It’s a split release from Innovative Leisure on 8″ wax with the ALLAH-LAS on the B-side.

Waterhouse offers us one brand new song which features his vintage big band sound and that moody swag that makes his lyrics memorable as they drip with attitude. Believe it or not, Waterhouse actually used these lyrics from the original Allah-Las version of the song and put them on top of a new song he was composing (see this link for more info). He howls with authority throughout the track with his raspy “oohs” and “aahs” in-between the call and response vocals, all while the funky guitars follow right in his footsteps. The second half of the track see’s these wet and funky guitars combine with the broken, jazzy keyboards that helps give this song its raw, authentic vibe. The B-side version (which is the original version) by the Allah-Las sounds much less rough while also somehow sounding a bit more mysterious. It has a much more traditional sounding garage rock twang that gives it its own special edge and in the end it works wonders for the song. With that in mind, it’s almost like we’re getting the best of two different worlds within one solid single. Now it’s time to hear for yourself – listen to both sides below!

Nick Waterhouse – Don’t You Forget It –

Nick Waterhouse – Official Website/Blog
The Allah-Las on Tumblr
The single was limited to 500 for Record Store Day – not sure where to get one now folks! Try Discogs or eBay

Past Related Posts:
Is That Clear 7″ (Innovative Leisure)
Find Nick Waterhouse in our Top 30 7″ Records of 2011