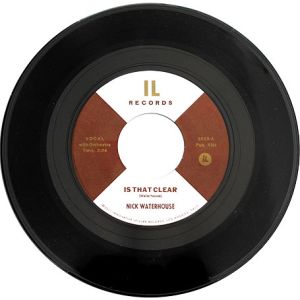 Here’s a special one that might catch you off guard with it’s vintage feel. It’s a brand new 7″ single from NICK WATERHOUSE released by Innovative Leisure, sounding like it was brand new decades ago.

However that is not nearly the case as Mr. Waterhouse just put the finishing touches on his full length album, a record that should hit the shelves in due time (as he’s confirmed via Twitter). Waterhouse does a fantastic job with giving rhythm and blues a fresh new spin for 2011, creating a revival of sorts that looks and sounds too good to be true. “Is That Clear” is an excellently invigorating track with an endlessly gritty crackling texture from start to finish (or maybe that’s just the quality of the rip), employing all of the essentials to R&B like a shrieking saxophone and broken keyboard lines. Waterhouse’s raw and unrefined shouting combines with clanking percussion and his impressive guitar freak outs which quickly prove to be the highlight of this revitalizing track. You can feel the raw power as is pulses through your body and forces you to make a move, undoubtedly resulting in multiple spins as this track only gets better.

On the B-side, “I Can Only Give You Everything” changes direction with new momentum. There’s a big band feel here somewhere in the mix, sounding surprisingly moody and about as ambitious as things could get. There’s not much that’s going to stand in the way of this track with it’s pounding rhythm and army of brass instruments, which seem to patiently be waiting for something to pop off. With the snap of the finger, the last forty seconds of the track reveals a sharp and cringing guitar jangle that explodes with energy as Waterhouse and the gang howl like madmen over the clangorous mess. There’s not much else Waterhouse can give besides what he’s got, and he’s certainly delivered as far as this 7″ proves. Keep an eye out for his EP as well as his future moves.

I Can Only Give You Everything –

2 thoughts on “Nick Waterhouse – Is That Clear 7″”