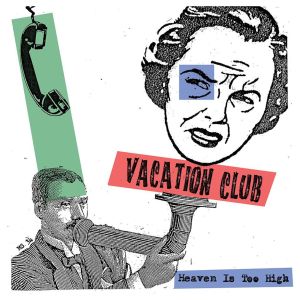 Magnetic South Recordings just released the debut LP from Indianapolis garage 4-piece VACATION CLUB. Heaven is Too High comes limited to 500 pieces, hot off the heels of their 7″ from Randy Records in 2013.

Heaven is Too High comes with 11 tracks, featuring some re-recorded versions of a few songs from their debut cassette on Happenin’ Records. The album combines an equal balance of lo-fi crunch with ideally clean-cut pop, leaving us to say the record falls somewhere in the mid-fi range.

Vacation Club combine their crushing pop tendencies with blasts of blown-out guitar noise and fuzz, ultimately creating a pseudo-innocent sound that constantly berates your ears. “In My Eyes” is a late album highlight, which is driven by fuzzy guitar hooks, heavily echoed vocals and a stomping rhythm. We’re led straight into a brief but searing wave of guitar filth, which quickly confirms the dirty but not-exactly-obvious edge in their sound. Album closer “Rats as Rats” chugs along with fuzz-crusted hooks and crashing percussion, sending us straight into a beam of rugged guitar static. Melodic guitars are scattered within the noise, making for a monumental finish that flattens us to pieces.

Flipping back to the A-side, “Gas Station” starts off with a buzz, quickly revealing Samuel Thompson’s bold, reverb-heavy squealing. He sounds exceptionally snotty and nasally and he becomes a crucial element in all of these tracks. Take “Forest Babe” as the ultimate proof (a track that’s appeared on both of their previous releases), which comes with a whirlwind of guitar grit and traces of melodic noise. Start by getting your fill of the album right below!

BUY the LP from Magnetic South – limited to 500 copies !
Vacation Club on Facebook

One thought on “Vacation Club – Heaven is Too High”