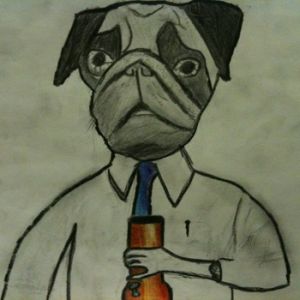 Early on it seemed like the VOYAGEURS of Fayetteville, AR never fully caught on although they were capable of delivering. With this new collection of songs they look to change that entirely with their own brand of psych rock.

Knowing Voyageurs since the very beginning, they have changed direction from their earliest demos and have obviously matured with full fledged rock songs with depth and composition. The feeling of ‘winging it’ is no longer an issue and it’s certainly no longer an option for them. As you dive into their latest effort “Freak Cave”, this only becomes obvious with each searing guitar solo.

Track two, “A Mystic” combines the psych twang of their early sound with their new, compositional outlook and the results are positively booming – they now know exactly what sound they’re going for and they nail it with crunchy guitars, crackling fuzz bass, psyched-out soloing and flattening rhythms. Following that comes “Lazy Kiss on A Bus Bench”, where things only get heavier as the track comes into play. You can feel the energy pulsating deep at the bottom as it swarms and gets bigger – once the solo reveals itself you’re in the thick of the madness as these boys lay on their own style of convincing psych rock.

As the rest of this album plays out, the word “convincing” actually starts to become an understatement – for a band so young it’s hard to say they’re at the height of their powers because there’s so much time for them, but if you listen you know exactly my point. They know what they’re capable of now and clearly nothing is going to stop them. For example, the self-titled “Freak Cave” begins with a menacing bass line that sounds like the caliber of a high voltage power line pushed through something as thin as a bare wire – there’s so much energy coursing through that it’s going to burst at any moment and destroy everything in seconds. Their edgy and high energy sound is also conversely slacker-like and in the end is truly something to behold.

By the time “Maximum Roadhead” begins you should find it impossible for Voyageurs NOT to catch on. They continue to lay it on heavy and vary their approach from track to track to solidify the idea that they can be dynamic as well. The ending of this one will leave you picking your jaw up from the floor, much like how they continue to one-up themselves with each track that goes by from beginning to end. Skipping ahead to “UV Rays”, this is a jangly psych-punk rager for the ages. This one hits like a pillowcase full of bricks after a lethal bong rip that will leave you picking up the shards of your broken glass off the floor.

Every last song here has guitar work to rave about while combining it all with their youthful spirit and vigor, where the ultimate results are undeniably intoxicating, gratifying and totally relentless. They prove this to us one last time in album closer “Warp”, an instrumental banger that shows they still have goals to achieve, yet there’s not much more they could do to make us love this more. No matter what though this closer is quite a treat, almost like the equivalent of them never taking “no” for an answer. Do yourself a huge favor and get into the madness right below, you won’t be sorry. Catch them on tour this month – they will be in Philadelphia on August 11th – that’s tomorrow!

BUY the album from the band AND listen to the rest!
Voyageurs on Bandcamp – plenty of free downloads!!
Voyageurs on Facebook – find tour dates!
Follow Voyageurs on Twitter

One thought on “Voyageurs – Freak Cave”