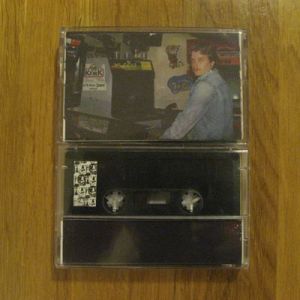 We haven’t covered a cassette here on the blog for a few months now, so I figured now might be a good time to set these gems free to eager listening ears. As far as I know, you can’t find most of these tracks anywhere else on the internet, so I’m very enthused to present you with HEAVY TIMES SICK LISTENS.

Coming from the Priority Male Tapes label, this is probably the most recent release from Chicago fuzz rockers Heavy Times. It’s not exactly clear whether they’ve released anything since this tape, but we’re pretty confident they haven’t – although we would totally love to be wrong about that. Before this the last we heard from these Chicago bros was their utterly addicting 7″ from the Hozac label, but don’t get your hopes up for the same quality production this time around.

We’re talking about cassette tapes here, and this release is all too perfect for a cassette release. Lot’s of tape hiss, clicks and pops cover this thing from front to back, and it works wonders for the oddball songs that dominate it. Nearly forty full minutes of headache inducing (the good kind?), weirdo psych-pop with a strangely nontraditional punk twist is included on both sides, and it’s got a little bit of everything that you may or may not have already heard from the ever-growing Heavy Times catalog. It’s all there: painfully gritty lo-fi production, harsh noise, crunchy and gurgling sound effects, and mostly unintelligible lyrics about god knows what. There’s even a bit of anger and angst thrown into the mix, which is essential because it probably wouldn’t be the usual Heavy Times you already know and love without that.

For the most part, the songs come and go while rarely surpassing the three minute mark. Each one comes packed to the brim with an unmatched, infectious energy that will surely work it’s way under your skin to keep you coming back again and again. Undeniably sick guitar licks can be found in just about every track, some being just as spiky and spiny as the last. The primal drumming action sounds as muffled as can be, but when paired with pulsing bass lines, can certainly still be mind-altering. A few of the songs included are recycled from earlier HT tapes – two of which I’ve left you with links to download at the very bottom of the post.

Track nine “Night Hives” from the A-side captures the Heavy Times sound in a well-balanced nutshell. Huge, wall-like guitars hang over your head daring you to make the next move while psyched-out and noisy licks create an even bigger and progressive sound. You can feel the energy vibrate through as they straight up rock out and never look back for even a second. These guys are simply always rocking out, and they leave behind the bullshit and the drama. There’s no lame formulas or rules to follow, because each song has it’s own sound and direction. These dudes obviously have a great pop sensibility, penning catchy song after catchy song from beginning to end of this tape, no matter how weird they manage to get. It’s easy to obsess over the ridiculous noise that’s coming through you’re speakers, and we’re ready to prove that to you with the songs below.

Now for the best part – you can download the entire cassette tape right here on the blog, courtesy of Priority Male – SICK LISTENS 2005-2010 DOWNLOAD – ripped and edited entirely by me. You can still download a few individual songs by clicking on them in the tracklist section below (the ones that are underlined), but just be aware that you can’t download these songs anywhere else 😉 (as far as we know). Don’t forget to buy the tape either – it’s super cheap and there’s only 100 copies to go around – “A MUST GRIP RELEASE.”

PS – Priority Male also has the cassette for download…the main difference being the tracks are not split up individually (saw and added this after the post was written…oh well!)

Stoned in the City –

-If anybody wants to help us with the track names give us a shout in the comments!

BUY the cassette directly from Priority Male Tapes – limited to 100 !
DOWNLOAD the entire “Sick Listens” cassette
Heavy Times – No Plans 7″ previously posted on the Drone
You can also find Heavy Times in our 7″ countdown from 2010
DOWNLOAD two earlier cassette tapes from the band, right HERE and HERE