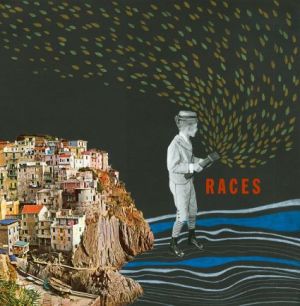 RACES, who were formerly known as Black Jesus, step up to the plate and release a brand new 7″ from JAXART Records. This is their debut release, which will eventually lead up to a full length album which they’ve recorded and produced themselves.

This band features seven different members, all who were somehow previously affiliated with each other from numerous other bands from the San Fernando Valley. Together these guys have captured a big and lush sound with dreamy qualities, but it doesn’t really supply any surprise. Maybe we’re too used to a specific sound over here, but this is missing an all too important hook to make it sink in and resonate with the listener. They’ve got the substance and the skill to pull it off, but there’s no potency.

The lyrical concept of “Big Broom” illustrates a point, which is complemented by mysterious star-gazing qualities lost somewhere deep in the universe. It packs a subtle punch in the crushing guitars and sweeping textures which makes it powerful in it’s own way, but it’s just too timid for our tastes. It’s almost like they’re shying away and that’s just no fun when listening. Unlike a lot of bands we cover here who lay it all out on the table, Races take the submissive route which means more careful listening. Now take a moment to listen to both sides of the 7″ right below, and don’t forget to pre-order from JAXART – there’s only 500 to go around.

PRE-ORDER the 7″ directly from JAXART – limited to 500 !
Races on Facebook