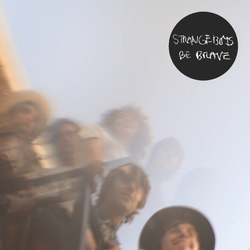 Not too long ago a friend and myself went to go see the Strange Boys play live. This was on their last visit to Philadelphia, and they played at the Danger Danger Gallery. I had been filming the entire set they played so I could use it to put up here on the blog, but promptly after the show singer/guitarist Ryan Sambol kindly asked if I wouldn’t put those videos on the internet. Fair enough. Maybe I can share them with you some day…

When they came to Philadelphia they were touring for their new album “Be Brave”, but that certainly didn’t mean they forgot to play song from their first record, “And Girls Club”. That’s a good thing too – most of the songs on “And Girls Club” are perfect for playing live, tracks like “Who Needs Who More”, “Poem Party”, and “This Girl Taught Me a Dance”. These certainly aren’t the only ones either. But with that being said, looking at the songs from “Be Brave”, not nearly as many of these songs would pack such a punch live. A few that would are “A Walk on the Bleach”, “Be Brave”, and “Night Might”, but after those couple you’re left with “The Unsent Letter”, “You Can’t Only Love When You Want”, and “All You Can Hide Inside”, which don’t necessarily deliver as well as the other songs do – they just kind of fall short of that mark. But this doesn’t mean that you shouldn’t still be interested in listening to “Be Brave” – remember, we’re talking about a live scenario here. Songs like “Da Da”, “Night Might” and “Friday in Paris” have that classic Strange Boys twang that we had so much of from the first record. “Friday in Paris” has an acoustic guitar solo in the closing minute of the song, while the ending of “Between Us” is bound to put a smile on your face. “Night Might” quickly becomes another Strange Boys classic with it’s sudden pace changes and the wail of the harmonica. The song gets really good at about 1 minute and 15 seconds in when they slow everything down, but they don’t forget to pick up the pace on last time before the end. I really hope that one day I can share these Strange Boys videos with you guys, so I’ll work on that for everybody. Oh yeah, take notice that the ratings and tags of each post will now be at the bottom of the post. Stay tuned…

3 thoughts on “The Strange Boys – Be Brave”