Not too long ago a friend and myself went to go see the Strange Boys play live. This was on their last visit to Philadelphia, and they played at the Danger Danger Gallery. I had been filming the entire set they played so I could use it to put up here on the blog, but promptly after the show singer/guitarist Ryan Sambol kindly asked if I wouldn’t put those videos on the internet. Fair enough. Maybe I can share them with you some day…

When they came to Philadelphia they were touring for their new album “Be Brave”, but that certainly didn’t mean they forgot to play song from their first record, “And Girls Club”. That’s a good thing too – most of the songs on “And Girls Club” are perfect for playing live, tracks like “Who Needs Who More”, “Poem Party”, and “This Girl Taught Me a Dance”. These certainly aren’t the only ones either. But with that being said, looking at the songs from “Be Brave”, not nearly as many of these songs would pack such a punch live. A few that would are “A Walk on the Bleach”, “Be Brave”, and “Night Might”, but after those couple you’re left with “The Unsent Letter”, “You Can’t Only Love When You Want”, and “All You Can Hide Inside”, which don’t necessarily deliver as well as the other songs do – they just kind of fall short of that mark. But this doesn’t mean that you shouldn’t still be interested in listening to “Be Brave” – remember, we’re talking about a live scenario here. Songs like “Da Da”, “Night Might” and “Friday in Paris” have that classic Strange Boys twang that we had so much of from the first record. “Friday in Paris” has an acoustic guitar solo in the closing minute of the song, while the ending of “Between Us” is bound to put a smile on your face. “Night Might” quickly becomes another Strange Boys classic with it’s sudden pace changes and the wail of the harmonica. The song gets really good at about 1 minute and 15 seconds in when they slow everything down, but they don’t forget to pick up the pace on last time before the end. I really hope that one day I can share these Strange Boys videos with you guys, so I’ll work on that for everybody. Oh yeah, take notice that the ratings and tags of each post will now be at the bottom of the post. Stay tuned… 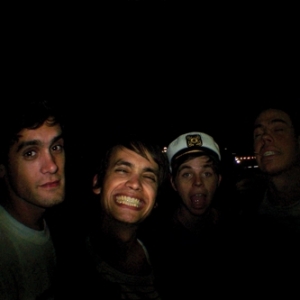 Hello, hello. Today I have an album for you that I wish I had known about much, much sooner. This album surely would have been included in my “Best of 2009” lists, but it’s a bit too late for that now, huh? This album is called “The Strange Boys and Girls Club”, and it was released by In The Red Records on March 3rd, 2009. Before initially listening to the record, I didn’t think it was going to be anything special, but I was sadly mistaken.

The Strange Boys, like many bands these days, come from Austin, Texas. Their roots can be traced back to 2001, when lead singer/guitarist Ryan Sambol and the now former drummer Matt Hammer used to be a punk rock duo back in 8th grade. More on that here. Since the 8th grade, the members have continued to concentrate on finding their very own sound, and this was most prominent on their 2007 EP, which is called “Nothing”. The EP contained just 4 short songs, and it was released on Dusty Medical Records. Unfortunately, this EP is no longer available, but hopefully they’ll press it again someday. The Strange Boys continued to work, self-releasing another EP in 2008 that they called “The Strange Boys Will Now Forever Be Known As the Martin Luther Kings EP”. It was a bit more difficult to find any information on this release, considering it was self-released by the band. Moving on to 2009, this would end up being the best year for the Strange Boys yet. Most importantly, they released their first full length album, which brought in some positive reviews from places like NME, Pitchfork, and the Austin Chronicle, amongst many others. While playing the album, many different genres might run through your head that you could tag The Strange Boys with, but once you pin one down, The Strange Boys are already making you change your mind. You might be thinking country music one second, and then all of a sudden you’ll be listening to striped down garage rock song with a bluesy guitar twist. One such song would be “This Girl Taught Me a Dance”, which appears on their full length album. Like this song here, every song has it’s twists and turns, and every song is just as good as the next. Some other album highlights would be “Heard You Wanna Beat Me Up”, with it’s insanely catchy first line “I’m in trouble with another man/I did something I shouldn’t”. I found myself singing this line all day yesterday. Singer Ryan Sambol continues in the song with “I didn’t do anything you wouldn’t”, which is 100% true. Listen to the song…you’ll know what he’s talking about! I could sit here and type all day, because each track is good in its own way. Seriously. Just download the album and find out for yourself. Thanks for reading, and enjoy!!!

The Strange Boys on Myspace.
And Girls Club: BUY