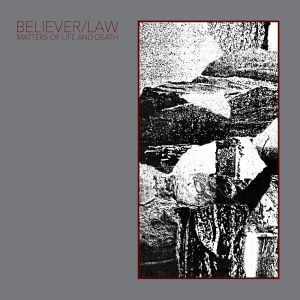 There really isn’t anything dangerous about that city anymore. So it comes as a surprise some of the most dangerous music today seems to be seeping out its sewers — Anasazi and Pop. 1280 are the kinds of nightmares only the splatter-punks could ever truly understand, and for a while Wierd Records often threatened to tear a hole in reality itself with their slate of mind-shattering releases. The city’s newest threat to your safety is Believer/Law, a noise transgression committed by members of Cult of Youth and Drunkdriver.

At only four songs, their debut EP Matters of Life and Death should be a quick and easy listen, but the record lingers long after it’s over. “Ashes” floats on a wave of synths until singer Michael Berdan assaults you with a bark that hits like a tidal wave crashing down, a theme that carries into “War Story.” The song is the kind of tumultuous, choppy industrial lurch that rocks the boat but never fully causes it to capsize. That job is left for “The Task At Hand,” with electronics that swell to Berdan’s growl, the song growing in intensity until setting off into a sample that launches everything into a cathartic finale. And if that’s the sound of the boat finally flipping, then “Contrition” is your body desperately fighting to stay above water as that creeping sense of dread sinks in that nothing can save you, the water filling your lungs as you flail ever so slower, and slower, until you catch those last few glimpses of the sky – the song relies on a mid-tempo beat that approximates harsh synth-pop more than straight industrial, but that clearly changes by the song’s end as Berdan’s mumbling turns to shrieks of “Go away,” as if he’s accepted his fate and doesn’t want to be saved.

Matters of Life and Death is an essential document of a band primed for something important. Had it been stretched to a full album, it might have felt bloated – all four songs carry the same kind of tone and thematic elements – but the EP is tight and concise, and it never overstays its welcome. Can the band deliver on this? Only time will tell, but until then, we at least have Matters of Life and Death to return to.

BUY the LP from Bandcamp – limited to 600 with different color vinyl !
Believer/Law on Facebook