Let’s get one thing straight, Dark Entries Records isn’t an exercise in nostalgia. “The original concept was to do one reissue, one new band, one reissue,” says Josh Cheon, owner of the label. “The problem was that I couldn’t find enough new bands to fill the gaps, so I went on this reissue phase for a while.”

In the five years since Cheon founded Dark Entries, the label has maintained a prolific pace – they’ve released over 70 records – in its quest to strike that balance between new and old. While the label has skewed more towards old by presenting a slew of high-end reissues of classic EBM, Minimal Synth and Italo Disco, among other genres, there has still been an effort by Cheon to search out vital new artists. Often, this professional drive coincides with his own personal desire to experience these unknown acts live. “A lot of it has to do with seeing a band, the live performance aspect. If I run into them and I’m, “I wanna put out your record.” And they’re like, “We don’t have any songs recorded.” I’ll say, “Whenever you do.” That’s very visceral for me, the live experience.”

Never was this more evident than in Dark Entries’ Five Year Anniversary showcase at Bourbon & Branch. Highlighting a diverse cast of artists whose music the label has released, including Bezier, Max + Mara and RedRedRed, the night was a journey through the label’s unique ability to curate varied and exciting talent.

Opening artist Bezier provided an energetic start to the evening with an analog assault on the senses. One of multiple pseudonyms for San Francisco DJ Robert Yang (he also records as Robot Hustle), Bezier combines a blend of early dance influences, drawing from Hi-NRG and Italo, with some more cosmic-reaching intentions, think ‘80s science ficton. The end result is a disorienting tour through a retro-futuristic dystopia, equal parts aggressive-reinterpretation of Trans-X and wide-eyed Blade Runner love letter.

Follow-up act Max + Mara offered a different perspective, acting as the come-down after Bezier’s high intensity opening. Working within the realms of Industrial and Minimal Synth, the duo provided the aural equivalent of a short trip – a cloud of blissed, lazy synths carrying you over a bed of watery keys, but with a hint of dread encroaching on the horizon as your paranoia slowly envelopes you.

The range of music displayed at Bourbon & Branch by Dark Entries ultimately ended up acting as a larger narrative on Cheon’s ethos of diversity. “I don’t want to fit into any genre,” he says enthusiastically, reflecting on his label’s output. “I want to have this umbrella of music I like, but I don’t want to pigeonhole myself into new wave, goth, or post-punk; especially, with the contemporary stuff, it’s all over the place.” 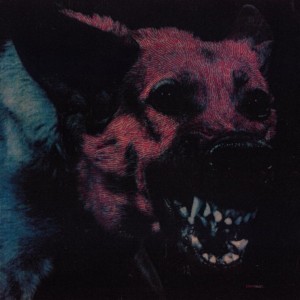 PROTOMARTYR’s Under Color of Official Right (Hardly Art) isn’t an opaque record; singer Joe Casey is forward with his hatred (for the other, the self and the whatever else) even when he tries to cover it with obscuring references. END_OF_DOCUMENT_TOKEN_TO_BE_REPLACED

Slug Guts weren’t so much a band as they were a primal force of nature conjured up from the darkest recesses of a chasm in the Earth – guitars whipped and struck with the frightening intensity of sandstorms bearing down on you as drums rolled in from a distance like thunder warning you to run, and those vocals… it was like being torn apart by a cackling pack of starved hyenas. WHITE HEX, then, seems to be a measured response.
END_OF_DOCUMENT_TOKEN_TO_BE_REPLACED