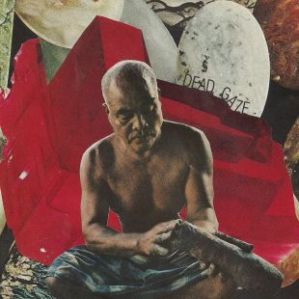 We just covered a first 7″ from DEAD GAZE, and here we are with the second. Coming from the French label Atelier Ciseaux in conjunction with La Station Radar, Cole Furlow continues on from where he left off last time.

We’ve got three new songs clocking in at over ten minutes, which makes for a highly thought-provoking listening session. There’s not much more I can say than what the band name already illustrates without being redundant, but you know the drill by now. “Somewhere Else” features clanky drumming at a slowed rhythm, immediately leaving you in an equally woozy and dreamy state of mind. The heavily textured sound feels brisk and icy, which strangely enough creates a cold wintry vibe that you probably didn’t expect. Good luck deciphering the vocals, because they couldn’t possibly be soaked in any more reverb than they are now.

On the B-side, “ENZ” is a bit different than the two songs that surround it. It’s an oddly gurgling sound scape of a track, with creepy howling vocals and subtle hints to more dreamy qualities throughout. This is where that “thought-provoking” comment from earlier generally stems from, because it certainly leaves you guessing what sounds you’re hearing. Closing out the 7″, “Fishing with Robert” employs the use of more colorful synth washes, which sweep over everything like a swelling wave in the ocean. It’s much more poppy and upbeat than “Somewhere Else”, but at the same time jangly and fuzzy and undoubtedly dominated by synths and electronics. You still can’t understand a damn word, but it doesn’t really take anything away from the music. Hear two-thirds of the 7″ below, and snag that one before it’s gone!

BUY the 7″ directly from Atelier Ciseaux – limited to 300 !
Dead Gaze on Myspace
Cats Purring Collective on Blogspot
Dead Gaze – Take Me Home or I Die Alone 7″ previously posted on the Drone

One thought on “Dead Gaze – Somewhere Else 7″”