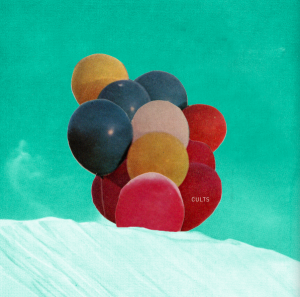 It’s never too early to fall in love with a band. When the brand new band Cults put out their first release ever – a 7″ record on Forest Family Records – that’s exactly what happened. Ever since their mentioning on websites like Gorilla vs. Bear and Pitchfork, this band has been making some serious waves all throughout the blogosphere. In the beginning, background information on the band was severely inadequate and practically impossible to find anywhere on the web, but that’s not a problem anymore (Now the biggest problem would be when their next release is due out). Cults is a two-piece band fronted by the couple Brian Oblivion and Madeline Follin, and they’re both 21. Currently they both study film in New York, and they both originally came from San Diego…which of course in German means a whale’s vagina. Right? Am I right?

The 7″ starts off beautifully, with the already-much-talked-about opening song “Go Outside”, which is simply about going outside and not being a lazy, bedridden scum bag all day. Singer Madeline Follin tells us she knows “What’s good”, because she’s been there before, and I’d have to take her word for it on this one. Whatever it is, it’s got to be better than spending the entire day in bed. Similar to laying in bed, “Go Outside” never quite takes any unexpected turns, and that’s part of the plan. They take a sort of minimalistic approach to the music; never over complicating anything or letting anything get too unorganized – it’s all there all the time. If you haven’t heard these totally blissed-out songs yet, be sure to check them out below. If you’re still interested, follow the link below over to their Bandcamp page, where you can download the entire 7″ completely for FREE! And Happy Mothers Day to the moms of the world!