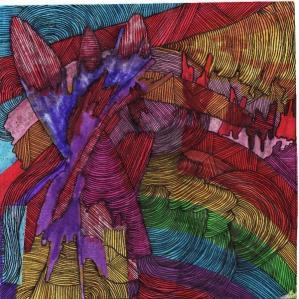 Good afternoon everybody. As you may remember, a few weeks back I had received a couple of 7″ singles from Matt Beck of SHDWPLY Records. The first single that we covered was the “Haunted House” 7″ by Brooklyn’s own Florida, and today we have the second single.

It’s by a band called The Super Vacations who hail from Virginia. They have a noisy, lo-fi pop sound that’s also a bit on the psychedelic side, but never do they let one of these elements overcome the rest in their music – it’s all their all the time, which may be why this 7″ is such an interesting listen. The opening track “Henry” is a fast and noisy pop song that seems like it’s over just as soon as it starts. If you’re having a rough day, this song might just be able to put a smile on your face. You may not necessarily be able to understand what they’re singing about, but the combination of the noisy lead guitar and reassuring vocals are enough to tell you that everything is cool. The following track “The Void” takes a step back from where “Henry” was. They slow everything down on “The Void”, making things a bit more eerie and alarming. Those spaced out guitar chords definitely work to make this song have a menacing feel to it. Moving on to the next track “Ten Second Freak Out”, this would be the longest track featured on the 7″. It kicks off with an unusual sounding guitar riff that’s shortly replaced by a high pitched distortion, which goes to show that these songs don’t follow any predetermined song writing formulas. The last track “The Paradise” is another one that could get you smiling, with it’s extensive lead guitar that guides the band through the rest of the fast paced action, which once again ends before you know it. With that being said, it seems like “The Paradise” ends a bit too soon, but I guess you can only fit so much music onto a 7″ record.

One thought on “The Super Vacations – Henry 7″”