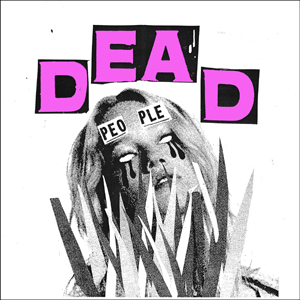 Thanks to the folks at Windian Records, we get to share this awesome single with you right before the new year – it’s the first 7″ from DEAD PEOPLE, made up with some reckless garage rock that is right up our alley.

This single is part of the most recent batch of material from Windian Records, which appears to only be the beginning of their debauchery as a record label. This 7″ goes a long way to show us what Dead People are all about, but at the same time it gives us an idea on what route Windian Records will take as a label…and it’s looking pretty good.

These bold and hasty rockers in Dead People certainly know how to put together some psyched-out garage rock bangers. This single is a straight up slop-fest from front to back, riddled with all sorts of mutilated guitar crunch and noisy jangle to boot. This noisy racket is what drives their songs into destructive oblivion, creating hook heavy tracks like “Sif City” and “Motorcycle.” “Motorcycle” is constantly forced forward by relentless, straight-forward guitar work that never lets up yet it remains as simple as it could possibly be. The following track “Misleady” falls in a similar vein with its caffeinated guitar licks, supplying an endlessly gritty and metallic fervor to the mix that is difficult to ignore. That being said, if you’re not into this sort of hell-bent sound, you’re going to be quickly turned off.

For the rest of us, one spin through this unsettling single proves not to be enough. The invigorating beat down that these tracks supply is enough to knock you on your ass, aside from the fact that they could potentially blow out your speakers. Listen with caution because this explosive single is not to be missed. Go snag the 7″ right now – it’s a mere 5$!

BUY the 7″ directly from Windian Records – limited to 500, only 5$ !
BUY the cassette version from Dirty Pillow Recs – limited to 100, same price !
Dead People on Facebook