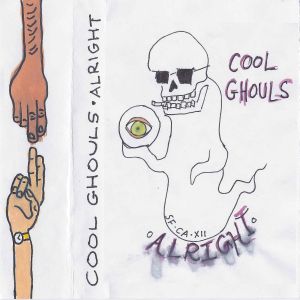 COOL GHOULS are a group of four garage-rockin’ scoundrels from San Francisco, California. They dropped their Alright cassette at the beginning of August, brimming with their own strand of bluesy garage rock.

The sun always shines in California – or at least you get that feeling when listening to this cassette. Alright comes with six tracks spanning over a twenty-two minute tape, serving up some invigorating garage rock with a bluesy, soulful spirit. It’s all increasingly twangy and concentrated, almost like it was recorded inside a cramped hallway or a tiny bathroom. More importantly than all that, the frequent use of vocal harmonies and brass instruments really helps give this material its own special and authentic twist. It’s the kind of thing you really need to hear to believe. For some of those reasons, it’s actually somewhat fitting to compare them to our hometown hero’s here in Philadelphia – the Eeries.

The cassette begins with a sloppy and noisy introduction in “Bad Bad Look” before it really starts to take form. Once they hit their stride, there’s really no looking back. The gritty twang of those opening guitar chords should leave you hooked for the following five tracks. In the process you’ll encounter innocently harmonized choruses (“First Taste of Spring”) and swift and bluesy 50s doo-wop tunes (“Spring Break Blues” or “California”) with a piercing brass section – “Spring Break Blues” eventually splits off into a twangy and optimistic finale that will quickly have you loving everything about this band. They bring it all home in cassette closer “Alright,” keeping the good vibes flowing with a lusty story to wrap it all up.

Listen to Alright in its entirety right below. If you’re trying to cop a physical cassette tape (I’m thinking I should too), it might be worth asking the band. Send’em an e-mail – ghoulmail AT gmail.com