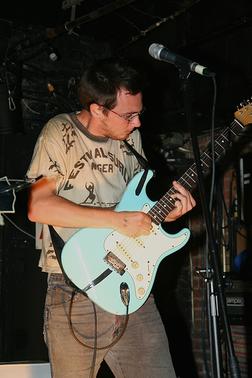 The Library of Congress are no longer a band anymore, but they once hailed from the wonderful town of Glen Rock, New Jersey. Before bands like Titus Andronicus, Real Estate, and Ducktails (all from NJ), the Library of Congress had formed while all the band members of those bands were still enjoying their days in high school together. The line-up for the Library of Congress consisted of Andrew Cedermark on guitar and lead vocals, Kyle Cedermark on drums, Martin Courtney IV on bass guitar and vocals, Patrick Stickles on guitar and vocals, Sarim Al-Rawi on guitar, and Matt Miller on keyboards. Some of these names might be strikingly familiar to you, mainly because they’re the members of the bands that have been getting all the attention lately. Martin Courtney IV is now the lead singer and guitarist of Real Estate, while Patrick Stickles is the lead singer and guitarist of Titus Andronicus. Andrew Cedermark also spent some time playing in Titus Andronicus, and he also releases solo material on the Underwater Peoples label, check him out here.

As far as this release from the Library of Congress goes, I don’t really have any information on it. [ EDIT: I have been informed that the name of this album is “Selected Writings on the Human Condition”. Thought you might like to know that. ] The most I can tell you is that their name was once “Seizing Elian”, and throughout their time as a band, Andrew Cedermark was the lead singer. I don’t know what year the album was released, what label put it out, or where you can buy it, but I can tell you that it is worth your time, especially if you’re even the slightest fan of any of those bands I listed earlier. It gives you insight to their earlier days of music before they’re bigger, more popular bands emerged, and it shows you how each band went in their own, unique direction. Real Estate took the more polished poppy psychedelic route while Titus Andronicus took the rugged dirt path to ramshackle punk rock. If there is anything worth telling you readers, it’s the fact that there is a song on this album called “Albert Camus” which is an earlier version of Titus Andronicus’ album closer from “The Airing of Grievances”. Exciting!