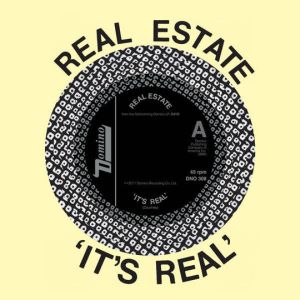 Here is the first single from the upcoming REAL ESTATE album “Days” on Domino Records. It’s been awhile since we’ve heard from Real Estate but now they’re back with their refreshing twist on indie rock.

“It’s Real” is a track that has been unveiled since the summer months by now, but the track officially sees the light of day with this 7″ we have here from Domino. It’s released with another previously unreleased track, an instrumental sun-shining jammer titled “Blue Lebaron”. Both of these songs together solidify some undoubted promise for Real Estate as they begin to put the finishing touches on their sophomore album “Days”, due out soon enough on October 17th from Domino.

“It’s Real” easily enough looks to be the lead single from the album, featuring maybe some of the most peppy and upbeat work Real Estate has ever penned until now. An undeniably cool breeze sweeps through heaps of warming guitar jangle and poised and throbbing bass lines, combining into a wave of unmistakably positive vibes as they sail into the sunset. You can feel the rays of the sun beating on your back as dusk settles in up until the very last guitar strum that so appropriately puts the finishing touch on this gem. Flipping the 7″ reveals the instrumental B-side “Blue Lebaron”, another nautical-tinged number that so carelessly sways across the steady, calming pace of the waves in the ocean. Hear both sides of the 7″ right below and buy the 7″ from Domino while it’s still available!

Past Related Posts:
Out of Tune 7″
Alex Bleeker & the Freaks 12″
The Library of Congress – Selected Writings on the Human Condition
Real Estate Live in Philadelphia w/ Family Portrait (04/18/10)