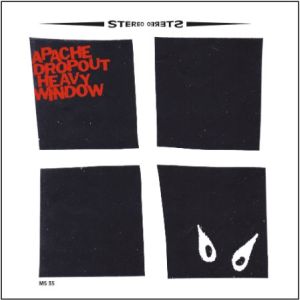 Bloomington, IN trio APACHE DROPOUT are back again with their new album, Heavy Window. It’s their third LP since 2011 and first vinyl full-length for the Magnetic South Recordings imprint in Indiana.

Heavy Window comes loaded with 11 gritty garage stomps, flavored with buzzing trash guitars and an overarching psychedelic haze. Frontman Sonny Blood leads each track with his raspy howl, backed by constantly shredded guitars and primitive percussion. Together these elements make up their lysergic boogie-woogie, concocting a tripped-out sound that will have you seeing double while your tapping foot constantly stumbles behind. Album-opener “Sittin’ Around” creates that wobbly feeling early on, built around delayed guitar effects and jangly, tambourine-heavy percussion. Although these tracks generally sound striped-down, they still hit hard and heavy with copious amounts of searing guitar grit. Find out on September 20th when Apache Dropout come to Philadelphia, wherein they’ll join the stage with local scuzz masters Purling Hiss for their record release on Drag City (more details TBA).

Listen to a small handful of tracks from the LP below, then go snag it from Magnetic South – 1000 copies of the LP were pressed and the first 500 have glow-in-the-dark covers. Get one!