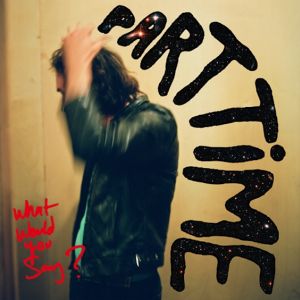 Coming from Mexican Summer is what appears to be the second official full length album from PART TIME. Their first came from Voice Academy Records in 2010 and this new LP looks to be a step up to the next level.

With a release on Mexican Summer, Part Time is sure to be a familiar name in due time. Their first release that came from Voice Academy Records appears to have some overlap with this new LP, which seems like a good indication that they took only the most memorable highlights from the earlier and worked around those for the latter. What you will find within this striking collection is equally glossy and murky electro-pop with a scarily vintage 80’s vibe, proving that this current fascination with 80’s sounds is certainly not going anywhere anytime soon. This is an immediate reminder of other names like Ford & Lopatin (formerly Games), although their overall goals appear to be different.

Sticky, laser beam like synths quickly take charge in a song like “Living in Pretend (My Girl Imagination)”, which (in time) gives you no other option but to feel out the infectious vibe and let it flow right through you. In other words, if you spend a few minutes with this and give it your undivided attention, you will be sold fairly quickly. For example, “She’s Got the Right” is a commanding track where fluttering synth textures sound both cool and icy to the touch. Then a syrup-like glaze totally envelopes the song while singer David Loca croons with demand as he is surely insistent.

This paves way for “In This Filthy City”, a true album highlight with island inflected percussion and a purely innocent summertime vibe. Eventually working their way into the mix is warped guitar licks that add great depth to this rapturous ooze, where there’s such a mysterious gaze about it you could be thinking for weeks before you actually put your finger on it. Next comes the self-titled track, beginning with a cosmic slide into the mystic center of yet another excellent track. This features an awesomely overwhelming array of sounds that display both experimentalism and stunning pop sensibilities, a combination that normally seems like it wouldn’t work out.

Yet further down the line, “Riots in the Streets” pairs jagged guitar work with glimmering synths – a dangerous combination on paper that seems questionable but in fact it’s quite perfect once your ears are introduced – hereby showing expert craftsmanship that has earned it’s praise. This collection is an undoubted justification of a particular sound that passes every test with flying colors. The best part is you won’t even see it coming.

Living in Pretend (My Girl Imagination) –

In This Filthy City –

What Would You Say? –

BUY the LP directly from Insound – limited to 750 !!
Part Time on Facebook

3 thoughts on “Part Time – What Would You Say?”