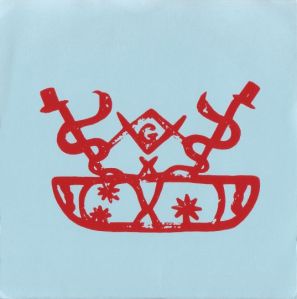 Now here’s something I don’t think you’re going to be too familiar with. This is exactly why I like going to my local record stores to dig around and find something new and fairly unknown. I didn’t know a thing about what I was buying that day, but it was only $2.99, so I almost felt like I had to buy it.

What I speak of is a beautiful 7″ record by none other than a band called NAVIES, and believe it or not, I almost can’t find ANYTHING about this band anywhere on the web. The furthest I got was with this entry over at the Discogs database, which means somebody else out there has this 7″. I wish I had found that sooner, because I actually went downstairs to scan the cover art for blog-entry purposes because I didn’t think I would find it anywhere else on the web.

But this awesome 7″ comes on a beautiful slab of clear yellow (or gold) vinyl, complete with an insert giving some background information on the release and also the lyrics. If it wasn’t for the insert, I would be completely lost on what to say. And I’m just noticing this now, but apparently this 7″ came out in 2004. So how long was this sitting around in the record store without a home? Well, I gave it one, and without further to say, I give you Navies.

The 7″ only has two tracks (as you probably expected), with one song on each side. The total time is just shy of 8 minutes, and it’s 8 minutes of noisy, sloppy, shambolic post-punk with nods to bands like Double Dagger or any other punk-related band who bring the action full-throttle all the time. The best part about that is Double Dagger frontman Nolen Strals is mentioned on the insert included with the 7″ for credits on the design and printing of the record. Awesome. But moving on.

Navies seems as if it’s a 3 piece band, consisting of members Sean McGuinness, Ed Brant, and Mike Petillo. I’m just going by what this insert tells me. The music was recorded and mixed on 4 tracks during January and Feburary of 2004 by none other than the Navies boys at places called Eternal Life and Invisible Hand in Washington D.C. The name of the record label is FOLIAGE, and they actually have a website listed for the band (www.naviesband.org), but that shit don’t work. I went to even greater lengths to share the music with you guys, and I ripped the music right from the vinyl so you could listen to it below, so please enjoy! If you want to see more pictures of the record or pictures of the insert, just send me an e-mail!

Navies on Last.fm
Navies – Seeing Hands 7″ on the Discogs Database
Edit (Nov. 30th, 2010) – just found this stuff below
Found this about NAVIES too
Navies – An Estate LP
Navies – 2 Song 7″