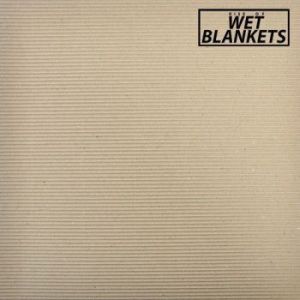 Billy Gardner (of the Living Eyes, Ausmuteants) was a nice enough brother to share his guitar with younger brother Zane – the result of such brotherly love has birthed Wet Blankets, and ultimately this 12″ mini-album. Rise of Wet Blankets is home to 11 tracks, only two of which were previously released (as a 7″ on Goodbye Boozy). Zane Gardner sings about the real stuff – crap school teachers, people watching him while he sleeps and people committing suicide on live television. The album doesn’t suffer from a single bum track – they’re all gold – from the fist-in-air chants of “Hex in the City” to the wiry guitar goodness of “Sleeptalker,” these guys hit the mark 11 times out of 11.

“Marge is a Wet Blanket” bursts things wide open from the get-go. It leaves behind a gaping wound that they just keep picking at until it becomes affected and risks amputation from too much gangrene. The good news is you can still listen without an arm or a leg. “No Carrots” is heavier with a touch of grungy guitar sludge, leaving behind a nasty mess that nobody in the right mind wants to clean – they blow right through the track in a minute flat, loading your ears with screeching guitars and pummeling percussion. “Hobo” has a noticeable pop flare to it, citing bright lead guitars floating above a beam of crunchy fuzz. “Fridge Too Far” becomes an immediate album highlight, driven by a menacing guitar hook with short, melodic licks sticking out on both sides. “Kits” unfolds with a layer of shredded guitar grit, driven by a simple but jarring riff that’s both stressed and coated in rust. The album closes out with “Dieter Caught My Bus” – the re-recorded A-side from the very first Wet Blankets record – and it’s packed up tight with a string of spiny hooks that will pierce straight through your eardrums. Get to listening straight below.