PURLING HISS release Weirdon, their second album for Drag City since 2013’s Water on Mars. They’re about to head out on a full US tour that runs until the end of November. END_OF_DOCUMENT_TOKEN_TO_BE_REPLACED 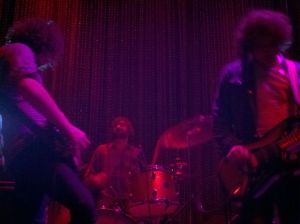 Plenty of shows and events took place in the city of Philadelphia this past Friday night, but anybody who ended up at the sold out Record Release show of PURLING HISS at Johnny Brenda’s knew they made the best of their night. Water On Mars was released by Drag City Records on March 19th, which only meant that this celebration for the record was long overdue. Joining Purling Hiss on the stage for the night were hometown heroes SPACIN’ along with the Chicago-based AXIS:SOVA (who just released a new 7″ on Philly-based label Richie Records), who together set us up to endure one hell of a damaging performance. END_OF_DOCUMENT_TOKEN_TO_BE_REPLACED