NAOMI PUNK – Television Man LP: After dropping one of our most recommended albums of 2012, this grungy trio returns with their first for Captured Tracks. They pick up right where they left us on The Feeling, continuing their slowcore aesthetic and dirgy, funeral-march execution that is unlike anything else out there. This record is meant to be played loud (and the band reminds you of that every chance they get), so crank that knob and let these songs corrode your ears to dust. There’s a few more twists and turns up their sleeves this time around, and the end result is positively crushing – listen to “Television Man” now. 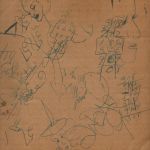 Honey Radar is the moniker of Jason Henn, a bedroom recording project based in Richmond, Indiana. Chain Smoking on Easter is a collection of guitar-driven psychedelic-pop songs, arranged with a healthy dose of melodic guitar racket to keep you cringing happily. Songs are perpetually glinting through this blown-out layer of noise, unfolding in these short, 1-3 minutes bursts that are short but sweet. The album is a split release from Indianapolis label Third Uncle and Philadelphia label Treetop Sorbet Recordings, who are releasing the album on vinyl and cassette respectively on August 26th.

Released by Academia Tapes in Charleston, SC, Psychosys is the follow up to Dumb Doctors debut cassingle from 2013. Dumb Doctors is the brainchild of Scott Dence, and his two latest fuzz-fueled anthems should lead to a full-length LP before the end of the year.

BICYCLE DAY – I Had A Place To Be CS:

The band is called Bicycle Day and the opening track on their upcoming cassette is called “Righteous Acid.” Do you need any other hints? Released by Lollipop Records, I Had a Place To Be is the debut release of any sort from the California-based trio. Their sound combines surf, garage and punk, built with reverb-heavy vocals and a menacingly hazy atmosphere. The material was recorded at Thee Mens Warehouse, a collective studio and art-based space in Anaheim, CA. Hear some of the album below, and sit tight for the tape release sometime this month!