COUSINS are a garage pop duo from Halifax, Nova Scotia, whose music plays considerably brighter and more summery than the cold, wet part of the world they hail from. Their third album, The Halls Of Wickwire, just dropped on Ba Da Bing and Hand Drawn Dracula Records. END_OF_DOCUMENT_TOKEN_TO_BE_REPLACED 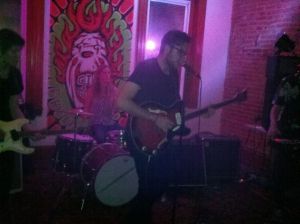 COLD SHOWERS and COUSINS each came a long way to play for us in Philadelphia last night. Cold Showers hail from out west in Los Angeles, while Cousins come all the way from Halifax in Nova Scotia, Canada. Also joining them was Coke Weed from Bar Harbor, Maine and (((Taco))) from no other than Philadelphia. Together this line up destroyed eardrums for the mere fifteen people upstairs at Kung Fu Necktie, leaving me with no other question than where the hell were you last night? Right now Cold Showers are in the process of touring for their upcoming debut LP on Dais Records, Love and Regret, which officially drops on October 9th. They played for us a generous portion of the album, which also includes some tracks from older Cold Showers singles we’ve been raving about for the past year. As for Cousins, the friendly duo ripped through a handful of tracks from their album “The Palm at the End of the Mind,” who are probably responsible for the majority of my hearing loss as I type this passage. Check these videos below and see just how the show played out. END_OF_DOCUMENT_TOKEN_TO_BE_REPLACED