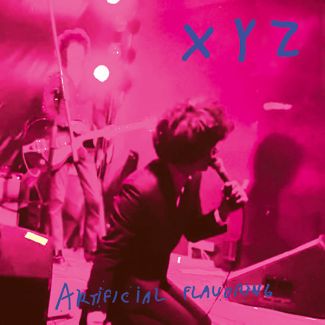 XYZ is the trans-Atlantic collaboration between American Ian Svenonius and Frenchman Memphis Electronic. You might recognize Mr. Svenonius’ effort to free Arthur Lee with his former group, the Make-Up, or his more recent work with Chain & the Gang or Escape-ism, the same way you might recall Mr. Electronic’s time with NON!, the Dum Dum Boys or Die Idiots.

Svenonius’ cheeky vocal delivery hovers above Memphis’ beds of drum machines, retro synths, and fuzzy guitars. There’s the spot on riff on the vapid nature of American consumerism in the form of “Artificial Flavor” in which Svenonius lets his freak flag fly. Some of the album’s other tunes seem bent around the fallout of the recent presidential election, such as “It Ain’t Fair,” or the reality showbiz fantasy/nightmare of “The President Plays Electric Guitar,” or the red state razzing of “Don’t Tread on Me.” The singer also channels some of his own existential angst into tracks such as “Nowhere to Go,” and “I Hate Memory Lane.”

Album closer “Let Me Be Free” finds Svenonius looking for the exits of all the things in our modern existence that are keeping him down both personally and professionally. If this all sounds like it would be a dark or depressing trip, you couldn’t be more wrong. This record is a fun romp that even hits on a few danceable grooves. With an undeniable chemistry between the pair of creators, XYZ is well worth seeking out via MONO-TONE Records. What are you afraid of? Do it. Be free.