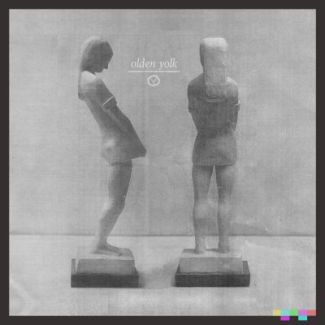 Trouble in Mind presents the brand new album from OLDEN YOLK, a 4-piece based in New York City. Ten lush tracks fill their eponymous debut, clocking in for nearly 40 minutes of clean and colorful rock and roll that fits best into your Sunday morning routine.

The addiction likely started for you when Trouble In Mind first released the lead off single “Takes One to Know One” a few months back. Guitarist Shane Butler shoos away about dark days and defeat within. He’s supported by squinty-eyed guitars and their uniquely uplifting squeal, providing the perfect dichotomy to his lyrics. Gospel-like choruses give way to a splitting and warbled slab of guitar soloing, held together by that rhythmic twang nestled deep in the background. It’s all driving forward constantly until it’s time to hit that replay button for another 8-minute aural journey.

There’s a thin layer of psychedelic glaze enveloping their delicate sound, which they execute in a few different ways. “Cut to the Quick” is a bright and poppy number, following a wonky bass line and wiry guitar hooks interwoven in a dazzling display. Butler’s breathy vocals are split with bassist Caity Shaffer. “Common Ground” offers the opposite side of the same coin. Waning guitars bounce and wobble through the hazy atmosphere, combining for a haunting and somber tone that eventually overflows into a crashing finale. “Hen’s Teeth” boasts a folksy jangle with some nasally guitar plucking and a shuffling beat. It’s a shimmering highlight found midway through the LP, incorporating a hypnotic chorus for an overall soothing tone.

If you were ever into the handful of Ultimate Painting albums that Trouble In Mind has also released, there is a high chance this Olden Yolk record is going to strike a chord with you. Hear for yourself with these few tracks below – the LP officially hits the streets TODAY! Listen below!

BUY the LP from Trouble in Mind – official release date is TODAY !