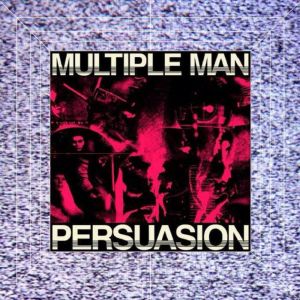 Brisbane duo MULTIPLE MAN released this 12″ EP on Burka For Everybody Records in November 2014. Although there’s a few other tapes and records to their name, Persuasion is our first true encounter with the duo.

This maxi-single provides 80’s vibes galore infused with an invigorating, electro-funk aesthetic. Your questions are as unanswered as ours: is this stuff trapped in the 80’s, or is it a futuristic time capsule sent back to the present from the year 2055?

The men behind the music, Chris and Sean Campion, are identical twin brothers, with Chris also dedicating time to another project you may know as Nite Fields. Together, the brothers create their stunning hybrid concoction, fusing these glossy 80s sounds with the occasional buzz of guitar and their patented clang and throb formula that is clearly working for them. Monotone and cavernous vocals echo through the tracks, cutting through the bleeps and bloops as dark and dimly as possible. On the B-side, “Slave for Love” comes with acetic, dissolving electronics that radiate a colorful and palpable gust through the neon-speckled affair. Vocals bounce and echo off the walls as if they’re being sung in a narrow hallway covered in porcelain tile. The thick buzz oozes as if you were trying to put the lid on an overflowing container of slime, but it just won’t fit and inevitably drips down the sides. Get an earful below and feel the gravitational pull that is Multiple Man.