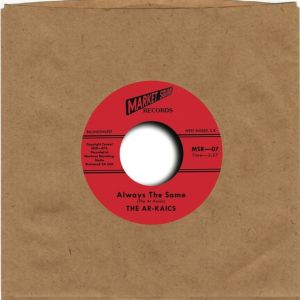 Market Square Recordings in Billingshurst, UK just dropped two more 7″ singles to their name. One of them is the fifth 7″ to date from Richmond, VA pop crew THE AR-KAICS.

These guys released their first single in 2013 and they’ve come quite far since. Their singles have all been released by five different labels, one of them being Windian Records who also released their debut full-length in 2014. With two new quality tracks like these up their sleeve, it’s hard not to think they’ve got something else brewing for 2015.

“Always the Same” is the equivalent to a caveman’s punk rock – slowed down, jagged and chunky. There’s brighter glam-rock traces in their sound that said cavemen wouldn’t care as much for, but regardless, this A-side is a total ripper. Guitars are explosive and ravaging solos are executed with precision, backed by roaring vocals and the heavy punch of percussion. B-side “Let Me In” changes momentum completely. It’s built with glowing guitars and a deep, chugging bass line that totally oppose one another. There’s a looming sense of uncertainty stemming from the murky vibrations. Guitar effects sound as if they’re being pulled from high in outer space or the deep, dark trenches of the ocean – they’re dominated by tremolo and resemble an underwater sonar, adding an overarching bit of spook to the mix that is absolutely delicious. Maybe you’ll disagree, but we’d say that B-side just stole the show on this smoking little 7″. Now give your ears a proper listen and cue up that repeat button.

BUY the 7″ from Market Square Recordings – limited to 300 !
The Ar-Kaics on Facebook

Related Posts:
She Does Those Things to Me 7″ (Speakertree Records)
Find the Ar-Kaics in our Top Thirty 7″ Records of 2013