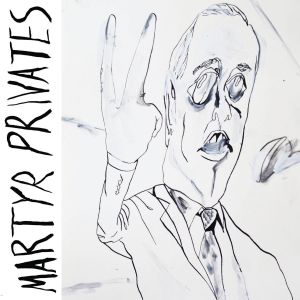 The Brisbane-based bruisers MARTYR PRIVATES return at last with their debut full-length record. Bedroom Suck (Australia) and Fire Records in London release the LP together.

The songs on their new record creep along at a staggered pace, slowed and burned by heavy layers of guitar filth that peel the paint back on the walls. The thick coating is backed by the scuzzy croon of Cameron Hawes (Slug Guts), recalling the nasally and thick-accented vocals of Jason Pierce on early Spacemen 3 records. However this record is far from a heavenly drift through space – it’s an odd journey through a hazy plane of desert-plagued grunge pop. Altogether it’s filled with tones that are grungy, pristine and blistering, whether individually or all at once.

Thick, grimy chords are the driving force of “Someone’s Head” – an introductory pummeling to an album that’s loaded with bent and beautiful moments. They showcase a balance of each as we’re driven into the ground by a constant thud and Hawes’ catchy hooks. “Something to Sell” is a crushing anthem stirred by a torrent of sun-burnt guitar. Hawes’ vocals soar through the pungent waves with a clear and slightly boyish tone. “Yawning War” is a complete dirge, centered around a dreary hook with speckles of melodic guitar weaved through a steady tambourine rhythm. “Bless” is a re-worked version of the A-side from their 2012 single on Bon Voyage. “Rope & Tarp” is a twangy guitar serenade awash in a gospel-like glow of organs, encapsulating some of the album’s softer moments and showing off a touch of dynamic power. Get a dose of this heavyweight sound below and catch the snarling infection.