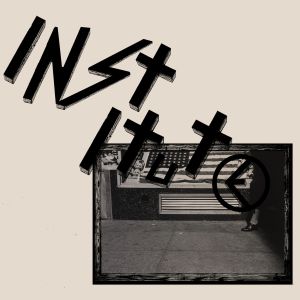 The instantly addictive 7” is not one to be missed. The front man, Moses Brown, began experimenting with the Crisis-inspired sound on his own and unintentionally formed the forthcoming band. What makes the band strikingly exceptional is their ability to produce these brooding bangers that shy away from being overly gothic, and instead embrace infectious melodies that give the songs ample replay value.

The opening track, “Giddy Boys”, builds with the rambling of a post-punk guitar riff that sounds off-kilter until the ruminating bass line and ironically militaristic drums kick in. The second song “Success” begins with the signature warlike drum march and explodes into an infectious hardcore assault that will leave listeners begging for more than the allotted 1:36. Brown’s stage presence has already become an alluring element in Institute’s live shows and no amount of tinny reverb can hide the singers talent on the 7″. A new EP, set to be released today (October 14) by Sacred Bones Records, will follow up the addictive Giddy Boys release. Give the 7″ a proper listen below now!

BUY the 7″ from the Abscess Records store – Katorga Works appears to be sold out !
Institute on Bandcamp