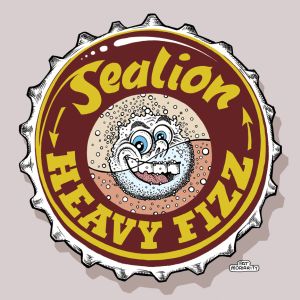 After quietly releasing two albums, SEALION’S third, HEAVY FIZZ, is set to blow out eardrums and any doubts about their legitimacy as bonafide surf-punks. Their unique blend of artsy post-punk and pop-infused surf tones make for a perfect, sultry-summer soundtrack. Released July 29, the album is available in both vinyl and cassette formats from Hovercraft and Lollipop Records respectively.

The Dallas-based band features four members from the Third Coast. Hunter Moehring plays guitar and takes on vocal duties with a droning croon that can explode with hardcore ferocity at will. Moehring shares guitar and vocal roles with band mate and bassist, Samantha Villavert. Together, their vocal stylings give the band a distinctive duality reminiscent of some experimental indie-rock. The melodic lead guitar is held by Cole Denton and the rhythmic drums and crashing cymbals are signatures of Alex Poulos.

Distinguished cartoonist Pat Moriarity crafted the album artwork for the cassette. Originally, his underground comic style frequented flyers of punk acts including The Replacements and Mekons. His artistic presence alone should indicate to listeners that this band has merited his seal of punk approval.

The album begins with “Automatic,” a frantic surf instrumental that develops into an explosion of lo-fi vocals screeching the stanza, “You’re so automatic!” The third track, “Lana,” opens with the melancholy backing vocals of Villavert, lapping drums and a catchy chord progression that gives way to a jangly surf guitar and the psychotically quivering monotone of Moehring (á la mode de Glenn Mercer or Paul Banks). The audible psychosis builds into a fit of hardcore screams set to the backing vocals, comparable to those heard on Crocodile Rock.

The sixth song, “Episode”, is evocative of vintage punk rooted in California skate culture. The album’s pace then comes to an abrupt halt in the demented beach pop number “Naked.” A true siren’s song, it begins with an ominous bass line that draws in an unorthodox progression of sauntering notes that would be creepy if not for Villavert’s hauntingly beautiful vocals.

After listening to HEAVY FIZZ, it is evident that Sealion has the capacity to be standouts amongst their contemporaries. Their discography showcases a variety of unique influences and steadfast drive to improve their craft. Listen for yourself right below.