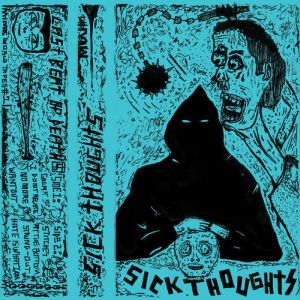 Drew Owen and his SICK THOUGHTS are back once again with a new cassette album from the freshly minted Mina’s World. It’s the first release for the Boston-based label – a hot pink cassette tape limited to just 50 pieces.

Last Beat of Death becomes Drew Owen’s third “full-length” output, bringing us eight fiery new pissed-off punk tracks crammed into almost 15 minutes of head-splitting, ear-obliterating fury. After two vinyl LPs on Dead Beat Records and a slew of scraggly 7″ singles, Owen appears to be making a statement with this new batch of raw, aggressive punk. He’s becoming more aware and sensible as he executes his disheveled recordings, despite the entire cassette tape being recorded in less than 48 hours time. Take a listen to “G.O.O.M.F.” right now for your first true exposure to Last Beat of Death.

BUY the cassette from MINA’S WORLD – only 50 pieces !
Sick Thoughts on Facebook