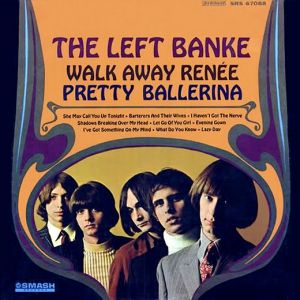 A few weeks back on an excursion to the local flea fair, I thought I struck gold. It was Father’s Day. As a still somewhat freshly minted Dad, my wife decided to cut me a break on this sunny Sunday morning by giving me license to zip around the dusty used vinyl stacks and milk crates with impunity while she hung back keeping a much slower pace with our 3-year old daughter. My rounds soon became a race, as there was a fellow record geek who was hot on my heels trying to nab the rare wax before I could get to each stand. I won the race – my big score was a copy of The Left Banke’s debut LP Walk Away Renee/ Pretty Ballerina, a monaural copy for $2 with some of the original shrink wrap still on.

Fans of 1960’s psychedelic and pop albums usually much prefer the mono mixes for a number of reasons; I prefer them mainly because they tend to sound punchier and they tend to bring out different elements of the songs that sometimes get lost in living stereo. They also usually hedge closer to the artists and producers original intentions. Having been a big fan of this album already, the excitement of scoring all different mono mixes was quite high.

Once I got home, I inspected the back cover. My copy bears a stamp that indicates it once belonged to the now long-gone, Mello-Dee Disc Shops located in Scranton, PA. Too bad, I’m sure it was a groovy place. A few other things grabbed my attention too. First off, a mailing address for a fan club – yes, this was an age where bands had fan clubs that operated by snail mail. Long before the days of Bandcamps, Tumblrs, Twitters, staying hip to what your favorite group was up to meant sending an actual physical letter and hopefully getting some word or at least some kind of newsletter or typewritten correspondence back. Finally, the last thing I noticed was this little technical disclaimer from the fine folks at Smash Records. It states, “Play your Smash Monaural recordings on a Stereo phonograph. The sound quality of a Smash monaural recording is actually enhanced on a Stereo phonograph.” I sort of let that settle over me for a second. How can the same mixes in both speakers, be enhanced by playing it on stereo player? A few seconds later and some research revealed the truth. My mono copy was not truly mono after all, and this supposedly mono copy was a little more fool’s gold than the genuine article. That being said, I still think there are at least one or two true alternate mono mixes hiding on here. So while it’s spinning on the hi-fi, let’s take this Throwback Thursday as an opportunity to give this great album and band that created it the once over.

Formed in 1965 in New York, NY, The Left Banke were pioneers of a sound that incorporated Baroque elements into then contemporary “beat” music. This meant that the Banke were one of the first groups to fuse rock with classical elements like strings and harpsichords. This was pretty revolutionary stuff at the time and the music still sounds fresh today almost fifty years on. By taking a snappy young garage band and adding the baroque elements gives the music a heavenly light with psychedelic sheen. The album even sports a few bonafied hits with the two tracks that give the debut its title. “Walk Away Renee,” is a classic 1960’s breakup kitchen sink-melodrama that sports a killer string breakdown in the song’s bridge. “Pretty Ballerina” is a slightly surreal track that on the surface is about going on a date with (as you probably surmised) a pretty ballerina. One is never really sure if the song is merely some kind of brag or if the singer is recounting a trippy dream or encounter he had the prior evening. The song’s swagger and confidence lands itself in the same territory as such contemporaries like The Zombies. Trainspotting fans of 1990’s indie rock will recognize the harpsichord line of “I Haven’t Got The Nerve,” from The Folk Implosion’s fluke 1990’s alterna-rock hit, “Natural One.” Elsewhere the album scores with forays into country-tinged, Beatles-eseque sounds on “What Do You Know.” Unique downbeat baroque psychedelic vibes are abound on tracks including “Barterers and Their Wives” and “Shadows Breaking Over My Head.” Elsewhere the album goes for more straightforward pop moves such as “She May Call You Up Tonight.”

These are just a few of the highlights on a killer debut that stands up to the test of time quite well. I often wonder how different the fractured, string-laden beauty of the third Big Star album might have sounded without this record setting the precedent. While the group in it’s 1960s iteration would follow up this record with one more before calling it a day (1969’s The Left Banke Too), by the time it was released founding member Michael Brown (the main writer of their debut) had already left the group. Although the follow up stands up as another solid entry in annals of 1960’s pop, it also sadly seems to lack some of the magic of their debut. Ultimately though, it doesn’t really matter with the sounds of this record forever preserved between the grooves, always ready to be discovered, even if sometimes it’s hiding in the dusty used record bins of yesteryear.

The Left Banke – Official Website
BUY the LP from Discogs – lots to choose from !

One thought on “Throwback Thursday: The Left Banke’s (Not Quite) Monaural LP, Walk Away Renée”