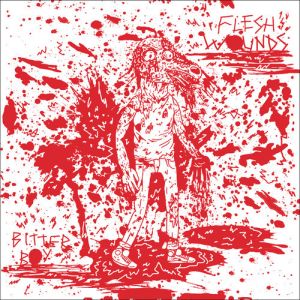 FLESH WOUNDS are a pissed off, no-nonsense garage trio from Carrboro, North Carolina, and they just put out Bitter Boy, their first 7-inch, on Merge Records.

Their wax debut serves up three filthy blues-based songs that waste no time picking their targets (primarily big egos and unrequited love) and giving them a loud, spiteful beatdown.

The band formed in 2011 as a side project, but quickly evolved into the members’ main endeavor. Montgomery Morris plays rhythm guitar and sings, Dan Kinney plays lead guitar, and Laura King plays drums. They released a cassette on All Day Records in late 2012.

Bitter Boy is stripped down and then some. The songs are driven by hard-hitting drums and Morris’ raspy vocals, while white-hot guitars hiss underneath. There are no bass tones to speak of, which works just fine for Flesh Wounds, whose dry, shrill sound amplifies the angst in each track.

Flesh Wounds don’t let dirty be the enemy of catchy. The title cut is an upbeat blues punk number with a snot-nosed refrain that’s feels great to sing along with: “Maybe I could love you just a little more / but I don’t want to be a bitter boy.” “Kennel Cough” slows the tempo down to a mid-paced groove, but ups the vitriol, taking aim at the proverbial alpha male whose bark is worse than his bite (“You’ll get the kennel cough / it’ll shut you up”). The closer, “Let Me Be Clear,” is the exclamation point at the end of Flesh Wounds’ rant — guitars yap, drums roil, and each member is totally unhinged.

BUY the 7″ from Merge Records – free shipping in USA !
Flesh Wounds on Facebook