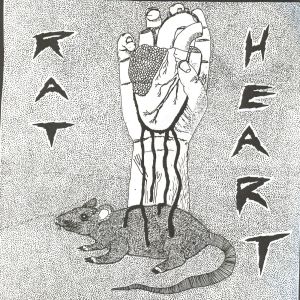 Don’t Touch My Records in St. Louis released this 7″ from RAT HEART in 2013. The self-titled single comes jam-packed with four smoking cuts of fearless punk and roll featuring members of Lumpy & the Dumpers and Alley Ghost.

Rat Heart themselves also hail from St. Louis, a group of four mutant punks who bubbled up from the grimy sewers. These guys deliver their punk rock in the most relentless way, built around explosive guitar hooks for a constant, all-out assault. All four of these tracks hit hard and heavy, coming on with a strong dose of classic proto-punk. “Barbed Wire Whip” comes with a menacing hook that’s fueled by flames and the clank of the cymbal. Vocals are aggressive and raspy, guiding us straight toward a brief but searing guitar squeal. Listen to these few tracks and you’ll be blown away. There are no doubts in my mind that this single would’ve cracked the top 10 of our 7″ countdown last year. Hear why with these tracks below.

End of the World –

BUY the 7″ from Don’t Touch My Records in St. Louis – find a way, you know you want to!
Rat Heart on Facebook