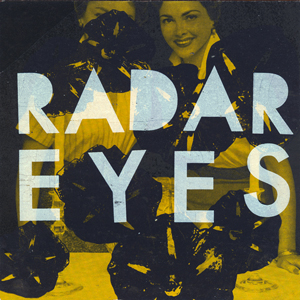 Chicago’s RADAR EYES are coming back in a wave, delivering two new singles released only weeks apart from each other in 2014. The first was Community on French label Requiem Pour Un Twister – the second is Positive Feedback on Hozac Records.

Word on the street is that Radar Eyes are putting together a sophomore LP, which will again be released by Hozac Records in Chicago. Since their last singles the band has gone through a slight line-up change, but there’s no reason to be worried as they’re still penning the same wonky psych-pop that led them here in the first place.

“Positive Feedback” is the rollicking opener on their second single for Hozac, combining a bit of surf, noise and psychedelic pop into one sweeping motion. The song glistens with sliding, surf-inflected guitars and fat bass throbs, held together by shaky hi-hat rhythms and Anthony Cozzi’s frantic howling. It all melds into this lovely melodic mess, creating this swaying, technicolor fuzz. “Community” is the A-side from their other new 7″ on Paris-label Requiem Pour Un Twister. It’s blanketed by a layer of haunting guitar haze, crafting up a warbled sound that is cold to the touch. B-side “Fall into Place” comes stirred by stringy guitars, building up the song with a particular wobbly vibe. If you haven’t yet, hear both sides of Community right below along with the A-side from the Hozac 7″.