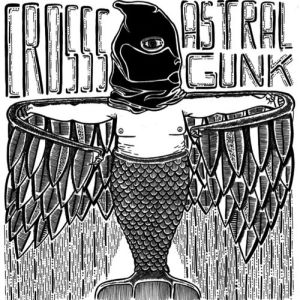 Pleasence Records is based in Toronto. This new split 7″ is their third release of the year, coming in a short run of just 200 pieces. It features Sackville, New Brunswick psych-punks ASTRAL GUNK and Halifax grunge trio CROSSS.

Crosss start the split with the mid-tempo dirge “Spectre.” Echoed vocals carve a path through a swell of grungy guitars, bringing on a dark, metal-flavored aftertaste. The vocals sound slightly possessed, only adding to the murky and evil vibes that ooze from the track. It’s summed up with some melodic guitar soloing, like catching a ray of sunlight reflected into your eye. On the other side, Astral Gunk takes a different approach altogether. A ravaging beat opens “Seven,” quickly shoving a beam of shredded punk guitars down your throat. It’s fuzzy and relentless, backed by a whirlwind of thuds, guitar screeches, and something else that sounds like radio interference static. The song takes a drastic turn, led by bluesy twangs and bass throbs. It’s much calmer with a slower rhythm, even with its freakish psychedelic undertone. If you like this filth you’re better off gripping sooner than later!