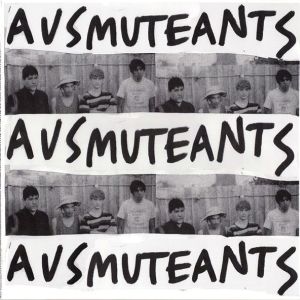 Aarght Records in Melbourne just released the debut LP from Geelong/Melbourne synth-punk four-piece AUSMUTEANTS. Amusements is twelve tracks of synth-heavy garage pop, honing in on the sound from their earlier 7″ singles on Anti Fade and Heinous Anus.

This band shares members with other local acts the Living Eyes, Hierophants, Bonniwells and Frowning Clouds just to name a few. Together they deliver a sound combining bedroom synth-pop and 60’s punk with a dash of noise. After switching up from a duo led by founding members Jake (synth, guitar) and Billy (drums), they added Marc (bass) and Shaun (guitar) to realize their new idea by infusing disco rhythms and new wave songwriting into their spot-on sound.

The album opens with the buzz of the synth in “Bad Day,” led by deadpan shouting and a swift rhythm section. Sticky synth solos add a fuzzy glimmer toward the end of the track, filled out by Jake’s anthemic chanting. “No Motivation” is a noisy little pop nugget, unfolding with a wiry guitar snarl that takes the track by force. It’s one of few without a synth-driven structure, built with sharp-edged guitars and a grungy bass line. “Hate This Town” starts off with the swell of the synth, offering a progressive edge to their synth-pop sound. Fluttering organ solos add a bright swirl along with the twangy guitar, bringing back the album’s synth-heavy tendencies.

“Kicked in the Head By a Horse” is a rowdy punk stomper, stirred by shredded guitar chords and angry bass throbs. “Flushing Problems” is led by a disco-infused drum beat, followed by wonky bass lines and shifty drumming. They morph into a dazzling finale, unleashing their inner-New Order by combining a melodic guitar solo with colorful waves of synths. It’s an immediate highlight, becoming one of the albums most crucial moments. It’s all summed up in “Fran Drescher’s Alien Abduction,” showing off their sound with a speedy combination of angular punk and synth-driven pop. The organs lead the way over a tight rhythm, driving this album straight into classic, must-hear territory. This is one of those sounds that’s either just right or horribly wrong, and these Aussie’s have nailed it! Listen now!

BUY the LP from Midheaven.com – imported from AUS so get it while ya can !
Ausmuteants on Facebook