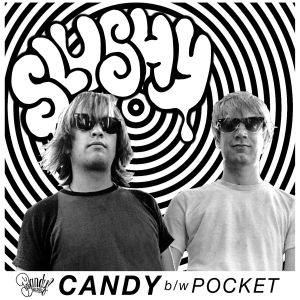 Chicago’s own Randy Records has done it again. Their fourth 7″ release of 2013 comes from Logan Square garage pop duo SLUSHY, led by Chris Kramer and Brent Zmrhal from other Chicago bands Mickey, Party Bat, and the Lemons.

“Is this guy for real? Who is Randy anyway? Why are all of his records so awesome? Why is this one as awesome as the other three? Is that even possible?” Is that your stream of consciousness when listening to Randy’s records too? Candy marks the label’s fourth release of 2013 and it’s just as good as any of the previous three, resulting in this one startling news flash: we like Randy Records. Now it’s our job to make sure you do too.

This is the debut 7″ for Slushy, who formed back in 2011 and have been honing down their succulent pop since day one. The result? These two charmingly innocent tracks – one a foot-dragging daydream and the other an invigorating banger that will have you up and rocking. “Candy” unfolds with the grainy jangle of the guitar, like sticky sugar oozing slowly over a piece of bubblegum. Sugar on sugar, who would’ve thought? This stuff was recorded on an 8-track reel-to-reel and was mixed that way too, so it really couldn’t sound any better. B-side track “Pocket” comes in and steals the show, unraveling with a little extra pop flare for a sunny and uplifting gem. It’s smooth and sweet, coming along with jangly guitars and Kramer’s cleanly concentrated howl. The track slowly builds into this dazzling finish, one that’s better if you just go ahead and listen. Don’t sleep!