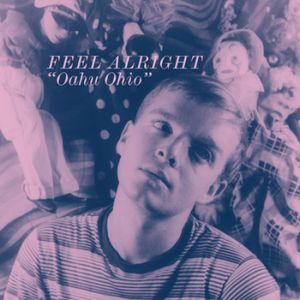 Thanks to our pals over at the Mammoth Cave Recording Co., FEEL ALRIGHT has just dropped their new 7″ Oahu Ohio. It’s home to three premium nuggets of sticky guitar pop, which the label proudly and fittingly declares “will restore your faith in humanity.”

Based in Calgary, this is the band’s debut 7″. These songs were recorded in 2011 and 2012 between Calgary and Pittsburgh, featuring members from other Calgary bands like Sharp Ends, Mandates and SIDS to name a few. Their debut is a strong one, being 1/3 of Mammoth Cave’s 7″ summer pack which also consists of GOLD and Nervous Talk (coming soon). Along with restoring our faith in humanity, these songs are so good we’d be more concerned if you didn’t like them.

“Oahu Ohio” opens the 7″ with a sunny jangle, followed by swinging bass lines, chiming bells and high-pitched crooning. It’ll quickly have you smiling and bobbing about, but this is still just the beginning. Track two “L’esprit de l’escalier” steals the show on this little gem, unfolding with a wiry guitar that leads us right into the joyous anthem. Feelings of ecstasy begin to leak into the air, tangling us in a warming guitar hook that’s to die for. They catch us off-guard with a crashing mid-section, acting as the perfect flare-up to such a seemingly delicate song. Needless to say, you should be ready to cue up your repeat button. On 7″ closer “Dark Incantations,” imagine if Chicago’s Uh Bones cleaned up their vocals a bit and you’ve got yourself a worthy comparison. Now, do yourself a favor and listen to these songs below for a magnificent start to your day.

BUY the 7″ directly from Mammoth Cave Recording Co. – 50% OFF SALE ALL DAY!!!
DOWNLOAD the 7″ for free on the Feel Alright Bandcamp
Feel Alright on Bandcamp