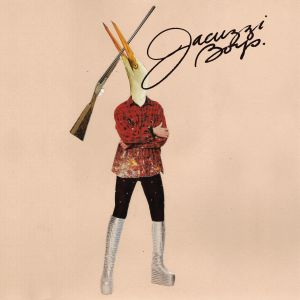 Miami usually isn’t the first place you think of as a birthplace for rock n roll music of any kind, but in the case of JACUZZI BOYS it seems impossible for them to be from anywhere else. A newly released LP out on Hardly Art continues to paint a sonic picture of South Florida through the wide eyes of these young rockers, but this time with a slightly gentler perspective.

At it since 2007, Jacuzzi Boys began their story with an EP on Florida’s Dying, introducing their weird and wonderful grimy garage sound to the world. The first batch of releases feel a bit dark and mysterious, 2009’s No Seasons LP (also on Florida’s Dying) being a prime example of that. Caked in dirt and reverb, it could very well be a soundtrack to a sketchy night at Churchill’s (Miami’s peculiar answer to CBGB, located in Little Haiti). Fast forward to 2011, and the release of Glazin’ (Hardly Art) which presents a much more upbeat and possibly happier Jacuzzi Boys. This time you can really feel the sunshine through all that reverb, and the album ends so sweetly with “Koo Koo With You” which feels halfway between a lullaby and a love song. It also provides the perfect transition to their newest record.

By the end of the first song on this self-titled LP, you are well aware that it took time to record this, there are details and layers that exist in their sound that weren’t previously there. It takes a few listens, but this album is still 100% Jacuzzi Boys. Singer Gabriel Alcala’s voice softly drifts across most of these songs like a gentle breeze though palm trees, weaving out of new and different guitar tones, triangle hits, and thoughtful bass lines. With a more nuanced sound, it’s no longer all reverb all of the time which really allows some of these songs to stand out more than they would have otherwise. “Black Gloves” and “Dust” are immediate favorites, they feel beachy and daydreamy, almost polar opposites to older songs like “Fruits” or “Burn it Down”. There are a couple of tracks that return to a heavier feel but it would be hard to compare them to anying Jacuzzi Boys have done before. It’s really refreshing to see a band try something new, unafraid of change and evolution. Having the freedom to labor over these recordings has allowed them to cast away into uncharted territories, yet in a way they still remain anchored to their self-invented Miami sound. Let this album wash over you like waves at high tide.