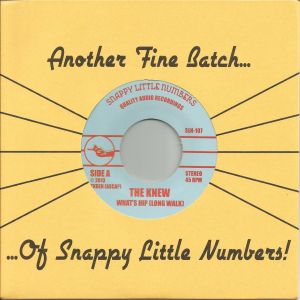 Based in Colorado, Snappy Little Numbers Recordings is coming back in a wave with some new 7″ wax. Up first is this ambitious single from THE KNEW, bursting on the scene with two explosive rock and roll anthems.

It doesn’t happen often, but I think it’s safe to say these guys tapped a little bit into that classic barroom rock magic (think something like the Hold Steady or the E-Street Band). Obviously it’s not Craig Finn or Bruce singing these songs, but that timeless sound comes through in the instrumentation in a few ways. It has that sort of loud, in-your-face intensity, but it’s the kind that’s positive and uplifting as it wipes the frown from your face. The song is made up with anthemic, fist-in-air chanting, coming driven by sparkling barroom pianos and a brass section. It all comes centered around a huge build-up that blows the song up with punchy drum rolls, leading us right into a dueling (and dazzling) piano-guitar solo. If that’s got you curious, you’re not going to want to miss these songs below. Listen right now, then snag the 7″ from SLN – it’s limited to 300 on randomly mixed colored vinyl!