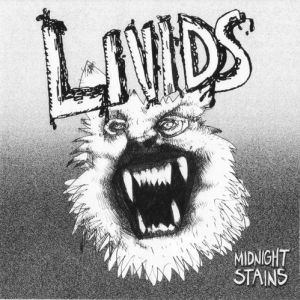 Praise the almighty punk rock ‘n’ roll gods, for LIVIDS are officially tearing shit up and making everyone that listens holier than a block of Swiss cheese. Hailing from Brooklyn, NY the band has released a whole myriad of singles over the past couple of months from She Likes Zits to Your House or the Courthouse.

There’s one in particular I’d like to mention – their latest one sided 7″ Midnight Stains on Goodbye Boozy. Listening puts you right in the midst of a fiery guitar onslaught, quickly becoming the most invigorating minute and a half of your entire day, pinky promise. I had a chance to get the nitty gritty from lead guitarist Dan Kelley, “I’ve tried to get Eric [Davidson] to tell me what the lyrics are all about but I think it’s just what it says, midnight stains… bodily fluids, beer, wine, whatever…in the middle of the night.” It’s agreed that the lyrics can be left up to your own personal interpretation and imagination. The single was released on Italy’s own Goodbye Boozy Records in a run of 240 copies. They released the single with 3 different cover designs featuring artwork by Livids vocalist Eric Davidson (also of New Bomb Turks), Scott Pickering, and Jeff Glave (based in San Francisco). The 2nd run of 150 copies all featured Jeff Glave’s artwork and if you are lucky you might be able to still snag a copy from Goodbye Boozy.

Kelley alludes to plans for Livids to record again in the near future as well as plans for a possible European tour next year, although nothing is confirmed yet. In the meantime, they have a bunch of shows lined up in New York over the summer. They’ll be playing with The Dictators on May 30th at The Bowery Electric, so if you’re from New York, YOU BETTER BE THERE! If you’re lucky, you might even be able to pick up a copy of Midnight Stains. Listen below!

BUY the 7″ directly from Goodbye Boozy – send an e-mail !
The Livids on Facebook

One thought on “Livids – Midnight Stains 7″”