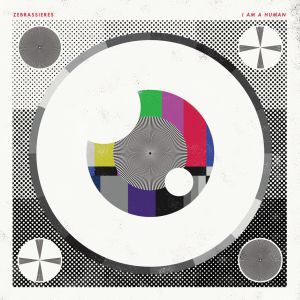 ZEBRASSIERES just dropped their debut LP I Am a Human on P. Trash Records in Germany. Led by Andrew Payne after relocating from Ottawa to Toronto, the backing band includes the entire Ketamines lineup.

If you’re now thinking this might fall somewhere in the realm of the Ketamines, you’re not entirely wrong. Upon listening it almost sounds like a sped-up version of Cop City/Chill Pillars – like if CC/CP did less acid, tightened up, and we’re on a steady diet of uppers. Ask someone else and they might tell you “Total Devo-esque power-pop. All hooks.” The cool thing is, none of these claims are wrong, and each can help give you an idea of what you’re going to encounter here. This is power-pop to the max, and the entire 22-minute album never misses a beat.

Things quickly become clear in s/t album-opener “I Am a Human”, which puts any one of the scenarios from above into action. It’s an extremely synth-heavy record, with every last guitar riff coming along with its own complementary synth hook. Take a track like “Opinion”, which punches along with snappy punk guitars while lysergic synth chords brighten the spastic sound from bottom to top. Other tracks like “Curse of the Curse” have a much more evil and sinister vibe, where the synths suddenly sound more like a haunted organ before anything else. With that being said, the keyboards in each of these songs come along with a unique tone, like the bleep-bloop nature of album closer “Do You Wrong?”, or the high-pitched drones of “Suit Lie.”

Get your fill of the album below (you can hear more on Bandcamp). Then go snag your copy of the album from P. Trash Records.

BUY the LP directly from P Trash Records – limited to 500 !
Zebrassieres on Facebook